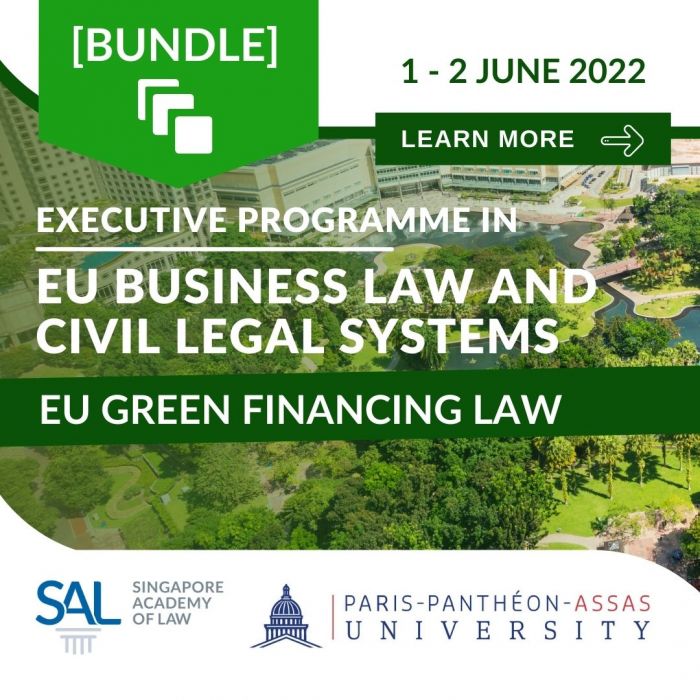 Module 3: EU Green Financing Law (1-2 June 2022)
This module is conducted in-person at the Paris-Panthéon-Assas University International Law School.
Participants outside Singapore may choose to attend this module via Zoom.

In 2015, the Paris Agreement emphasized the need to redirect the financing of economic activity to contribute to the fight against climate change and, beyond, to foster sustainable economic activities. Some national laws, such as French law, had already adopted provisions in this regard. Similarly, associations specializing in the promotion of best practices in financing had issued guides or principles for stakeholders in financing operations.

It is in this context that the European Union has intervened in recent years to support green finance. These initiatives have focused on the requirements for publishing information on the sustainable nature of the activities financed, notably through the European "Disclosure" regulation. The European Union has also aimed to establish a framework for identifying sustainable investments in order to combat the risk of greenwashing. This is the objective of the "Taxonomy" regulation. Even more recently, the European Union proposed in July 2021 the adoption of a draft Union regulation on European Green Bonds. The development of a European green finance law is, more broadly, in line with the objectives adopted by the Union in the European Climate Law adopted in June 2021.

The objective of the certificate will be to present the state of the EU regulation on green finance, while taking into account the guides and principles developed by specialized associations and of interest to green finance stakeholders.

Registration Fees
Reviews
Write Your Own Review
Only registered users can write reviews. Please Sign in or create an account
You may also like
Recently Viewed Products