Cross-border Restructuring: Recognition of Foreign Proceedings under Singapore Regime and US Chapter 15

Cross-border Restructuring: Recognition of Foreign Proceedings under Singapore Regime and US Chapter 15.

The proliferation of cross-border trade and pollination of businesses across borders represent the reality of businesses today. Accordingly, both the prospects and the actual number of multi-jurisdictional restructuring and insolvency workouts have increased significantly. Increasing attention has been paid to how the restructuring and insolvency proceeding in one jurisdiction may or may not be recognised in another jurisdiction, and the real implications of such a recognition or non-recognition. 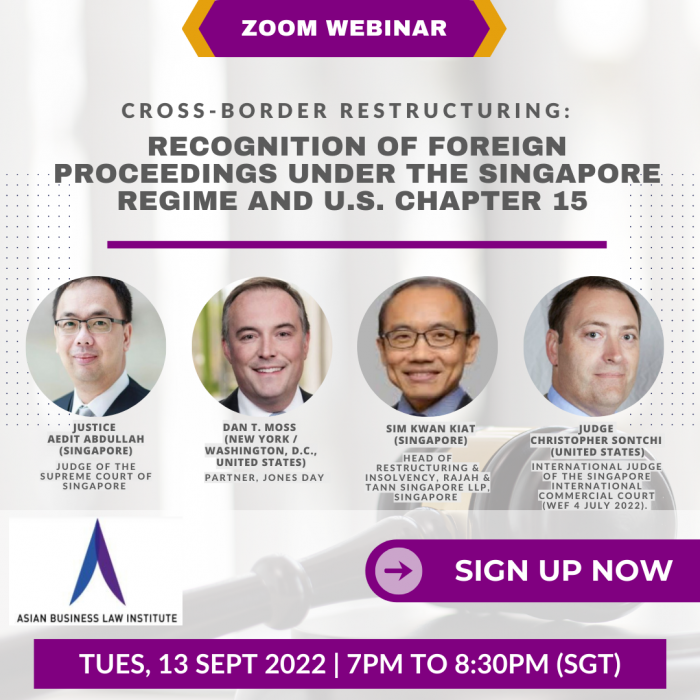 Organised by the Asian Business Law Institute, this webinar may include discussions of:

When is this webinar scheduled?

Please be mindful of the time difference if you are joining from outside of Singapore.

Who will be speaking at this webinar (in alphabetical order)?

Judge of the Supreme Court of Singapore

He joined the Singapore Legal Service in 1995 and began his career as a Justices’ Law Clerk. He then taught at the Faculty of Law, NUS, before re-joining the Singapore Legal Service. He has held various appointments, such as Deputy Public Prosecutor, Deputy Senior State Counsel and District Judge of the Subordinate Courts (renamed as State Courts in 2014). He was appointed Chief Prosecutor (Economic Crimes and Governance Division), and subsequently Chief Prosecutor (Criminal Justice Division) at the Attorney-General’s Chambers in 2011 and served as special counsel at the Monetary Authority of Singapore from January 2008 to June 2009. He was appointed Senior Counsel in 2012.

He is the Judge in charge of Transformation and Innovation in the Judiciary, and is also Chair of the Technology Cluster of the Singapore Academy of Law.

Dan has represented debtors, creditors, trustees, and creditor committees in some of the largest and historic corporate and government reorganizations in the United States. He also has extensive experience counseling clients on fraudulent conveyance, preferential transfer, fiduciary duty, and corporate governance issues.

Dan recently served as co-lead counsel for the Official Committee of Unsecured Creditors in the Toys "R" Us Property Company I chapter 11 cases and the Peabody Energy chapter 11 cases. Dan played a significant role in the City of Detroit's historic chapter 9 case — from litigating the City's eligibility for chapter 9 to confirmation of its plan for the adjustment of debts. He also represents the Washington Metropolitan Area Transit Authority in connection with its revitalization efforts.

In connection with Jones Day's representation of the Chapter 7 Trustee of Anthracite Capital, one of the largest chapter 7 cases ever filed, Dan oversaw all aspects of this engagement, which resulted in a recovery of approximately $47 million for the estate and a release of more than $33 million in secured affiliate claims. He also was a member of the team that represented Chrysler in the sale of its assets to Fiat and the decision to reject certain dealership agreements.

Additionally, Dan devotes time to monitoring various legislative proposals pending in Congress that would amend the Bankruptcy Code and pro bono activities such as the representation of disabled veterans. He is an active member of INSOL International and writes frequently about cross-border restructuring matters.

Kwan Kiat currently heads the Restructuring & Insolvency practice group of Rajah & Tann Singapore LLP, Singapore’s largest dedicated legal practice dealing with banking and financing disputes, corporate insolvencies, business advisory, workouts and debt restructurings, and enforcement of creditors' rights. He regularly advises and acts for banks and accounting firms in the whole gamut of insolvency proceedings, from liquidation, receivership to judicial management and schemes of arrangement, of which many had a strong cross-border element.

Kwan Kiat has been cited and recognised in the field of restructuring and insolvency by international legal directories such as Chambers Asia-Pacific 2022 as a “Band 1” practitioner, and recommended as a “Global Leader” by Who’s Who Legal 2022. He has also been identified as a “Highly Regarded” and “Distinguished” practitioner by asialaw Profiles 2022, IFLR1000 2022, and Benchmark Litigation 2021.

Called to both the Singapore and New York bar, Kwan Kiat’s practice comprises domestic and cross-border dispute and advisory work. He has advised and acted for debtors, lenders and insolvency office holders in debt restructuring, liquidations, and receiverships of both local and foreign companies.

Judge Christopher Sontchi obtained his Bachelor of Arts Phi Beta Kappa with a distinction in political science in 1989 at the University of North Carolina at Chapel Hill. He received his Juris Doctor from The University of Chicago Law School in 1992 and served as a law clerk in the Delaware Supreme Court from 1992 to 1993. He joined the law firm of Ashby & Geddes in 1993 as an attorney and was with the firm until 2006 where he represented nationally based enterprises with diverse interests in reorganisation proceedings filed in Delaware. Judge Sontchi was appointed Judge of the United States Bankruptcy Court, District of Delaware in 2006. He was designated Chief Judge for a three-year term from Jul 2018 to Jun 2021.

Is this webinar accredited for continuing professional development (CPD) points for Singapore-admitted lawyers?

This webinar has been accredited 1.5 public CPD points. Attendees who wish to claim CPD points are reminded to provide their AAS numbers or other number issued by the Singapore Institute of Legal Education (SILE) during registration. You are required to strictly follow the attendance policy of SILE before CPD points can be awarded. Please refer to www.sileCPDcentre.sg for more information.

I am a practitioner qualified in a jurisdiction other than Singapore. Will attending this webinar entitle me to claim relevant CPD-equivalent points in my own jurisdiction?

The answer to this question depends on the rules of the relevant governing body in your jurisdiction. In the past, we have issued letters of attendance accompanied by actual Zoom log-in records to assist non-Singapore-qualified attendees to claim their professional learning points. Therefore, if a letter of attendance and a Zoom record are all you need, we will be able to help. Likewise, we have issued the same set of documents to professionals other than lawyers who may also have such continuing education requirements.

However, if the rules of your jurisdiction require an event to be accredited, we regret that this session will not entitle you to claim points outside of Singapore.

What if I am unable to attend this webinar after registration? Are the fees paid refundable?

Unfortunately, the payments made are not refundable. If you are unable to attend the webinar, we request that you let us know as soon as possible so that we can let you transfer your slot to your colleague.

I am interested in this webinar but unable to make it for the live session. If I register, will a recording be made available to me?

Yes, a recording of the webinar can be made available upon request via a private link, though it is important to bear in mind that viewing the recording will not entitle you to any public CPD points. In principle, we only provide recording upon request by a paid attendee.

Will the materials presented at the webinar be made available to attendees?

The materials can be made available to attendees if the speakers so consent as they are the copyright owners of their presentation materials. Those who wish to receive such materials are advised to write to catherine_shen@abli.asia after the webinar for more information.

I want to sign up for the webinar but my organization requires registration to be done by other means, such as by sending an invoice to a dedicated portal. How do I register in this case?

In principle, your registration for the webinar is only confirmed after payment is made online. However, if you need to pay against a manual invoice by bank transfer or other means, or if you are from a Singapore government agency that uses a central invoicing system, please write to catherine_shen@abli.asia so that ABLI can arrange an alternative way of registration for you, taking your needs into consideration.

Who can I contact if I have more questions?

Please write to catherine_shen@abli.asia for any other query you may have about this webinar.

Please contact us at catherine_shen@abli.asia if you have any enquiries about the product.

Reviews
Write Your Own Review
Only registered users can write reviews. Please Sign in or create an account
Recently Viewed Products