A Treatise on Singapore Constitutional Law

A Treatise on Singapore Constitutional Law explores how constitutional law operates within the context of a non-liberal, secular constitutional democracy, within a religiously and racially diverse social setting. This treatise is concerned with both theory and doctrine, with explaining the black letter rules of constitutional practice and their underlying rationales, as well as critically examining how they work in practice. It seeks to draw out the broader significance of legal rules by identifying their underlying legal philosophy and engages the normative, conceptual and empirical dimensions of constitutional law, to present a thorough study of the law in Singapore. This book addresses both what the state of the law “is”, and evaluates this against what it “ought” to be or to aspire towards. 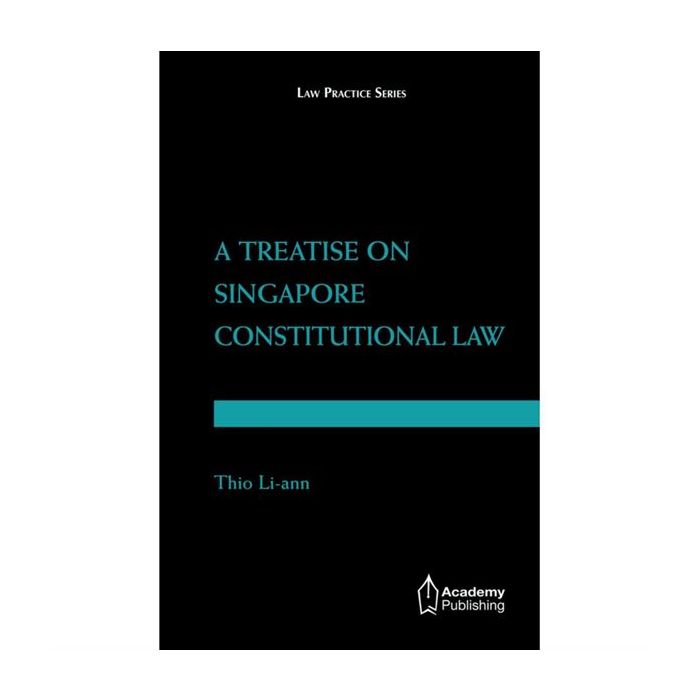 This book is a valuable resource for scholars of the subject, for law students, and also for lawyers who are unfamiliar with the intricacies and nuances of constitutional adjudication in Singapore and who are interested in Singapore’s developments in constitutional making and governance of a successful modern state. Highlights: - Insightful discussions on innovative constitutional practices in Singapore, such as the elected presidency with limited powers, unelected parliamentarians, etc - Comprehensive inclusion of comparative references from India, Malaysia, Commonwealth and other common law-based countries - Well-footnoted throughout with extensive references

Dr Thio Li-ann graduated with a Bachelor of Arts (Jurisprudence) from Oxford, and obtained her Master of Laws from Harvard and doctorate in international law from Cambridge. She is a Barrister of Gray’s Inn, and a Professor of Law at the National University of Singapore (“NUS”) where she teaches and researches constitutional and administrative law, international law and human rights in Asia. She was twice ranked an NUS Excellent Teacher. In 2004, she received the NUS Young Researcher Award.
She is a sometime Nominated Member of Parliament (Eleventh Session), and was consultant to Warwick University (on Singapore academic and political freedom issues) and an expert witness before the Australian Federal Court on Singapore constitutional and extradition law.
Formerly Chief Editor of the Singapore Journal of International & Comparative Law and General Editor of the Asian Yearbook of International Law, she currently sits on the editorial board of the International Journal of Constitutional Law, Journal of East Asia and International Law; National University of Taiwan Law Review and Australian Journal of Asian Law.
A prolific scholar, she has published more than 80 law articles, authored Managing Babel: The International Legal Protection of Minorities in the Twentieth Century (2005), and co-authored (with Kevin Y L Tan) Constitutional Law in Malaysia and Singapore (2010) and Evolution of a Revolution: 40 Years of the Singapore Constitution (2009).

Excerpts
From the Foreword:
“[Prof Thio] continues to pull no punches in analysing and commenting on all the significant decisions and pronouncements of the courts on the constitutional disputes which have divided the conservative or traditionalist and liberal political classes in Singapore. Her ‘national service’ as a Nominated Member of Parliament from 2007 to mid-2009 has burnished her credentials as a well-informed scholar with hands-on experience and knowledge of ‘the practical workings of constitutional law and ground realities’ of the governance of Singapore.
… [W]e are … jurisprudentially and practically enriched by the first full-length treatise on the constitutional law of Singapore.”
— Chan Sek Keong
Chief Justice, Singapore
Specifications
Book Review
The first substantive work on the constitutional law of Singapore was a 190-page book by S Jayakumar published in 1976.  Since then, generations of law students, judges and practitioners delving into the subject have relied mainly upon three editions of the casebook Constitutional Law in Malaysia and Singapore authored by Kevin Y L Tan and Thio Li-ann, the latest of which appeared in 2010.  Tan himself has also written a small book aimed primarily at a lay audience, An Introduction to Singapore’s Constitution, which is now in its second edition.  Thio’s Treatise is thus the most detailed treatment of the subject to appear for almost 40 years.
As one might imagine, the work comprehensively examines key features of the Singapore Constitution,  including the institutions of government and four major fundamental liberties – the rights to life and personal liberty; equality and equal protection; freedom of speech, assembly and association; and freedom of religion. Readers will find much to chew upon if they are interested in the constitutional innovations that differentiate Singapore’s legal system from the traditional Westminster model of government – Group Representation Constituencies, Non-constituency and Nominated Members of Parliament, and the Elected Presidency scheme, to name the more distinctive ones. Thio also traces how judicial approaches towards the interpretation of rights have become more nuanced.
However, rather more interesting are the discursions into constitutional theory. Thio notes in her preface that she set out to produce a “treatise… concerned with both theory and doctrine, … explaining the black letter rules of constitutional practice and their underlying rationales, as well as critically examining how they work in practice”.  Consequently, she has situated the material relating directly to the Constitution’s provisions within a wider theoretical framework. Taking a cue from Donald Lutz,  she discusses how constitutions are a confluence of power, justice and culture, and also looks at the concept of constitutionalism and basic constitutional doctrines. Western learning on these subjects is combined with a trenchant analysis of how they operate in the Singapore context. The sections on how the Singapore Constitution might be regarded as a combination of liberal and non-liberal elements, the use of soft constitutional law, and the evolving constitutional culture shaped by actions of the Government and the courts, are particularly illuminating.
Thio does not shirk from expressing views divergent from mainstream liberal thinking. For instance, she questions the invocation of the right to equality in some jurisdictions “to advance contentious rights claims and a radical social agenda… such as that of ‘same-sex marriage’”,  submitting that “issues implicated by the homosexualism agenda and its claims for equal, or special treatment, are complex and cannot be elucidated by merely invoking the ‘right’ of equality. This obscures other competing rights and goods and challenges long held values about family and marriage as social institutions.”  One may not necessarily agree with her opinion, but cannot deny that she has provided a perspective that stimulates further thought and debate on the issue.
The Treatise, which draws on experience gained by Thio from “a dozen years or so”  of teaching and researching public law, confirms her as one of the pre-eminent constitutional scholars in Singapore today. It was initially conceived as a monograph on both constitutional and administrative law. Subsequently, a decision was made to focus on the former – a decision well taken, as the text weighs in at nearly a thousand pages. The administrative law book is in the works, and if it is anything like the present book it should be keenly anticipated.
—Assistant Professor  Jack Tsen-Ta Lee
School of Law, SMU
Reviews
Write Your Own Review
Only registered users can write reviews. Please Sign in or create an account
You may also like
We found other products you might like!
Recently Viewed Products