[OUT OF PRINT] Ethics and Professional Responsibility: A Code for the Advocate and Solicitor (softcover edition)

Ethics and Professional Responsibility: A Code for the Advocate and Solicitor was specially commissioned by the Chief Justice to address the pressing need for such a Code. It presents a practical and detailed explanation of all the major rules and principles that govern an advocate and solicitor's professional conduct, and is an invaluable and indispensable resource whether you are an experienced practitioner or a fresh law graduate. 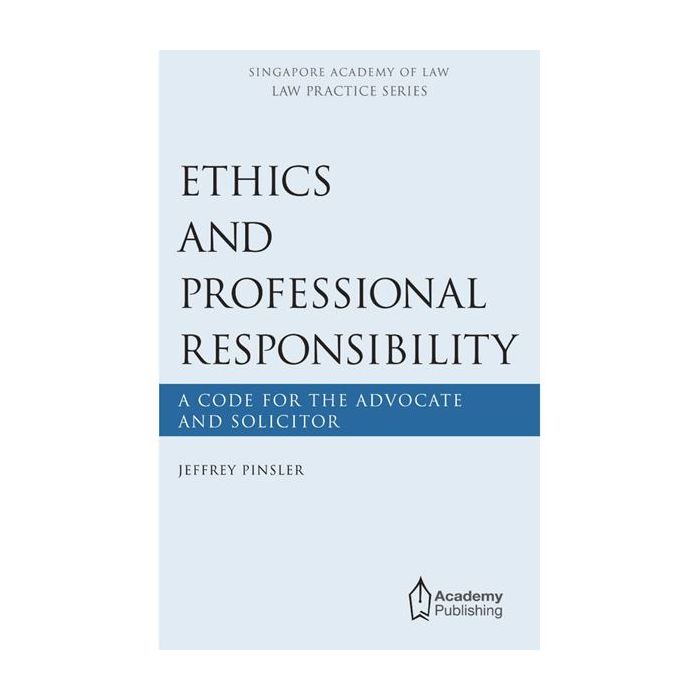 Jeffrey Pinsler is Professor of Law at the Faculty of Law, National University of Singapore. He specialises in civil justice, civil and criminal evidence, procedure and ethics. He is an advocate and solicitor, barrister-at-law, a Fellow of the Singapore Institute of Arbitrators, a Principal Mediator of the Singapore Mediation Centre, and also a member of various professional committees of legal and governmental institutions including the Singapore Academy of Law and the Supreme Court of Singapore. He has appeared as amicus curiae before the Court of Appeal and has spoken at, and contributed to, conferences and reform programmes in various countries. In 2004, he was conferred the degree of Doctor of Laws (LLD) for his contributions to learning. In 2008, he was appointed Senior Counsel. He is also Senior Professorial Fellow of the Singapore Institute of Legal Education.
He is a leading author in the fields of evidence, civil procedure and ethics. He has produced 16 major works and multiple articles in his capacity as writer and/or general editor, many of which are considered essential references by practitioners and are regularly relied on by the courts.
Jeffrey was specially commissioned to undertake this work by the Honourable the Chief Justice Chan Sek Keong himself.  The Chief Justice considered it timely for the Legal Profession to have a book which would formulate a general code governing professional conduct and explain the fundamental principles governing ethical behaviour in everyday practice.  As the immediate importance of this project required it to be completed as soon as possible, Jeffrey produced the manuscript within a year.