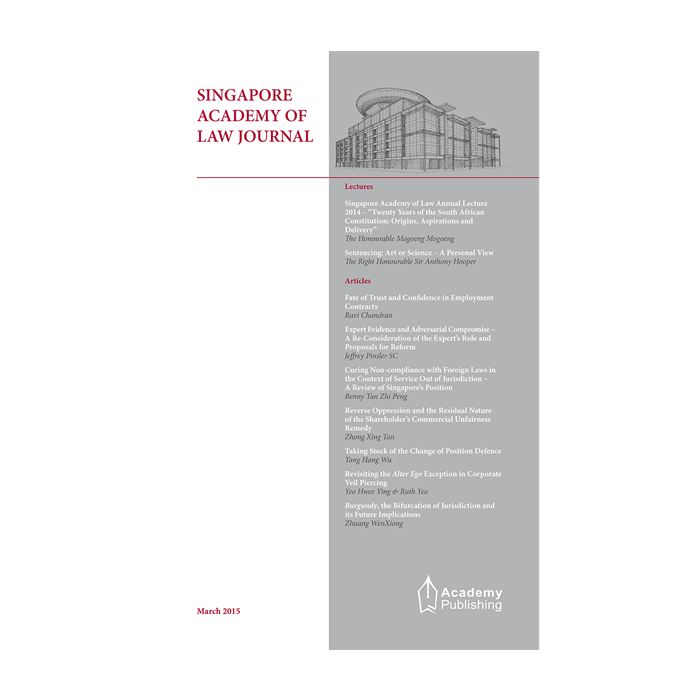 We are pleased to bring to you the SAL Journal’s special issue on insolvency law. This issue features articles on:

(a) the recent PRC Enterprise Bankruptcy Law and the issues which have developed since its enactment;

(b) insolvent banks and the financial safety sector net, with particular attention to the Northern Rock crisis in the UK;

(c) the current state of play under English choice of law rules in insolvency transaction avoidance;

(d) the duty to maintain equality in collective creditor actions;

(e) corporate rescue law in Singapore and the appropriateness of Chapter 11 of the US Bankruptcy Code as a model;

(f) the process of transition in personal insolvency law in English law and the lessons which may be drawn by other jurisdictions from this pattern of evolution;

(g) how the remedy of discharge by certificate of the Official Assignee was conceived, drafted and successfully implemented in Singapore;

(h) the status of an insolvent company’s encumbered assets under the laws governing property and insolvency;

(i) the key features of the debt repayment scheme and other related debt rehabilitation models in various jurisdictions that help wage-earner debtors with relatively small debts to avoid bankruptcy; and

(j) the duties of good faith and care owed by a mortgagee and a receiver to the mortgagor and suggestions where Singapore should depart from English law.

Articles
1) The 2006 PRC Enterprise Bankruptcy Law: The Wait is Finally Over
2) Insolvent Banks and the Financial Sector Safety Net - Lessons from the Northern Rock Crisis
3) Conflict of Laws in Insolvency Transaction Avoidance
4) The Duty to Maintain Equality in Collective Creditor Actions
5) Corporate Rescue Law in Singapore and the Appropriateness of Chapter 11 of the US Bankruptcy Code as a Model
6) Personal Insolvency Law and the Challenge of a Dynamic, Enterprise-Driven Economy
7) Balancing Competing Interests in Bankruptcy: Discharge by Certificate of the Official Assignee in Singapore
8) At the Intersection of Property and Insolvency: The Insolvent Company's Encumbered Assets
9) Alternatives to Bankruptcy - The Debt Repayment Scheme ("DRS")
10) Duties of a Mortgagee and a Receiver: Where Singapore Should and Should Not Follow English Law
Specifications
Recently Viewed Products