The Criminal Procedure Code of Singapore – Annotations and Commentary Digital

Authored and edited by a team of prosecutors under the guidance of the former Chief Prosecutor of the Criminal Justice Division (who is now the Deputy Chief District Judge of the Subordinate Courts), this book attempts to provide an insight into the raison d’être of each of the provisions in the Criminal Procedure Code 2010. It also discusses some of the jurisprudence surrounding predecessors of the provisions (where applicable) and how they might serve to form the contours of some of the provisions of the new Code. This book serves as a useful guide to all who are involved in the administration of criminal justice in Singapore, as well as academics and students of criminal law. 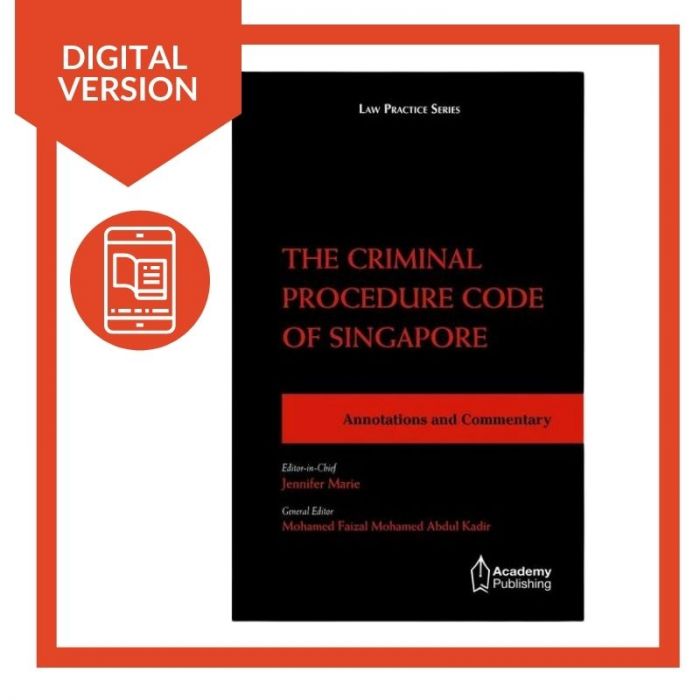 - Insightful discussions on the new provisions, such as community sentences and a framework for discovery, which had not previously been in existence

- One-stop resource: includes not only all the provisions of the Code, but also the current subsidiary legislation

“[A] book that gives an excellent explanation of the changes, how these relate to corresponding provisions in the old Code, what ends the provisions were drafted to meet, how they relate to other sections and whether or not those have been amended. The book also usefully considers the existing case law and the continuing relevance of this jurisprudence to the new provisions of the Code.
… this book will serve as an indispensible guide to all of those involved in its administration, judicial officers who preside over criminal cases, prosecutors … and defence counsel, as well as teachers and students of criminal law. It is my pleasure to commend it without reservation.”