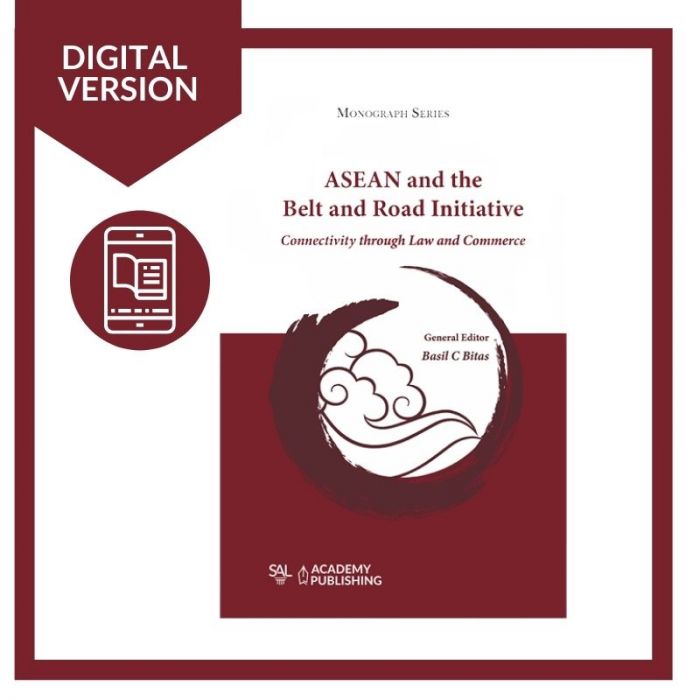 Skip to the beginning of the images gallery
Overview
The Belt and Road Initiative (“BRI”) is a seminal development concept of global and regional import. Unique in scope and ambition, it has the potential to offer a new development paradigm based on flexibility and operational efficiency. This book highlights the range of interdisciplinary expertise and applied skills, whether of a legal, commercial, financial or operational nature, required to bring the BRI and its defining projects to fruition while setting them within a broader economic and geopolitical frame. Readers will gain an understanding of the BRI’s significance as a development platform and acquire a detailed sense of how best to seize the opportunities arising therefrom. The BRI as both an idea and a development platform is destined to affect and shape the region for years to come. This book contextualises these developments and lays a foundation for informed analysis, decision-making and action.

Basil C. Bitas is a member of the Bars of New York State and Washington, DC, and has substantial practice experience in international legal and business matters, having been in-house counsel to a major multinational corporation in Lausanne, Switzerland and subsequently the Managing Partner of the Geneva office of a US law firm. The nature of his practice involved intensive interaction with the legal systems of North America, Europe, the Middle East, and Asia. In academia, he is a former Associate Professor of Law (Practice) at the Singapore Management University, where he taught Comparative Legal Systems, the Economic Analysis of Law, and Ethics and Social Responsibility. Recently, he has been a training consultant to the Singapore Academy of Law, where he assisted in the development and presentation of a seminar series on the Belt and Road Initiative. He is also an international research fellow with the Hong Kong-based International Academy of the Belt and Road, having contributed to a Blue Book on Belt and Road dispute resolution procedures and authored a chapter on ASEAN and its relationship to the BRI included in a compendium on the laws of the Belt and Road countries.

Mr Bitas focuses his current academic and policy research on legal convergence in general and its implications for ASEAN in particular, paying due regard to the broader geopolitical and economic context and the implications of the China-US relationship for regional development objectives. He has authored a range of peer-reviewed articles on these topics and spoken on these matters at various conferences and academic workshops within the ASEAN region and in China. He is also the sole author of a book entitled “Comparative Legal Systems,” published by LexisNexis in 2016.

Locknie Hsu is a full Professor of Law at the School of Law, Singapore Management University. She received her legal training at the National University of Singapore and Harvard University, and is a member of the Singapore Bar. Locknie specialises in international trade and investment law, covering areas such as WTO law, ASEAN economic integration, free trade agreements, digital commerce and dispute settlement. She has received several teaching awards and is co-ordinator of the Trade and Investment Group in the ASEAN Law Association (“ALA”). In 2017, she was conferred the Outstanding Service Award by the ALA.

Yiming Shen is senior vice-president of Marsh & McLennan Companies based in Singapore, leading China Client Services practice for Asia. Dr Shen started his career as a lawyer in Toronto with Manulife Financial, and has been working in the risk management and insurance broking industry for 18 years. He successfully represented Aon to set up the first Sino-foreign joint venture company licensed by the Chinese government in 2003. He graduated from Fudan University and earned his Doctor of Jurisprudence degree from Osgoode Hall Law School, York University, Canada. He published Dispute Resolution between Foreign Banks and Chinese Sovereign Borrowers – Public and Private International Law Aspects (Kluwer Law International), and China Executive Report – Insurance (Lexis-Nexis). Dr Shen also chaired the 1st Insurance Summit on Belt and Road Initiative organised by Asia Insurance Review in Singapore in 2018.

Quentin Loh was appointed a Judicial Commissioner of the Supreme Court of Singapore on 1 September 2009 and a Supreme Court Judge on 1 June 2010. He is the Judge in charge of the Singapore International Court and concurrently, was also appointed a non-permanent Judge of the Supreme Court of Fiji from August 2018 for a three-year term. He was made an Honorary Bencher of Middle Temple in 2017. He is a member of the Judicial Committee of The Academy of Experts (2020 to date). Prior to his joining the Bench, he was the deputy managing Partner of Rajah & Tann LLP from December 2003 to 12 August 2009. He was a key member of its international arbitration group as well as head of the Construction & Projects and Insurance and Reinsurance practice groups. Prior to joining Rajah & Tann in 2001 as a member of its Executive Committee, he was managing partner of Cooma, Lau & Loh, a firm he co-founded in 1978.  He was appointed Senior Counsel in 1999.

James Harris is an energy and infrastructure lawyer with over 30 years’ experience advising a variety of private sector clients (such as developers, investors and lenders) as well as numerous sovereign and sub sovereign public sector clients looking to procure different energy and infrastructure assets. He has been based in Singapore the past 20 years but has also worked in the UK and Australia. James is a founding member of the Asia Pacific Loan Market Association (APLMA) Project Finance Committee, Asia chair for the International Project Finance Association, and an adjunct professor of law at Singapore Management University.

Mark Hu is an infrastructure lawyer specialising in infrastructure related dispute resolution and transactional services. Mark has advised on some of the most high-profile projects in and out of China, and currently focuses on the outbound legal advice for Chinese contractors and investors. Mark has a dual education background in the areas of engineering and law, and is a guest lecturer in Tianjin University. He is a member of the Royal Institute of Chartered Surveyors and CIArb, and an expert member of the Expert Committee of MOFCOM’s China International Engineering Consultants Association.

Bruce Schulberg has extensive experience in the development and financing of energy, natural resource, and other infrastructure projects across Asia and in emerging markets around the world. Focusing on Asia from the earliest days of China's open-door policy and being on the ground in Asia for more than 25 years, Bruce has seen first hand the progression of Asia’s emerging markets and the development of Asian-based financing solutions for emerging markets transactions. Bruce is a member of the American Bar Association and the New York State Bar Association, and an adjunct professor for project finance at Singapore Management University.

Lee Chau Ee has specialised as a construction and engineering lawyer since qualification. He has an MSc in Construction Management (Project Management). He has a cradle to grave international construction, energy and infrastructure practice, having lived and worked in London, Dubai and Beijing, advising and acting for clients from conception, inception to completion of a project life cycle. He is now a Singapore-based partner of UK law firm Addleshaw Goddard and heads up its International Construction & Engineering practice in Asia. He is the current chairman of the Society of Construction Law (Singapore).

Jeremy Saw is a commercial leader, general counsel/head of Legal and a certified governance, risk and compliance professional, with long-standing Asia Pacific, South Asia and emerging markets experience. Jeremy’s insights stem from his knowledge across the infrastructure, renewable energy, natural resources, international development and impact investment sectors, his experiences working and living across Singapore, Indonesia, Malaysia, Myanmar, Thailand, the Greater Mekong region and Australia, and his work across the life-cycle and value-chain of investments/projects; encompassing corporate advisory and structuring, JVs, M&A, project development, operations and project finance (and general troubleshooting!). Jeremy is currently director, general counsel at InfraCo Asia, a company of the Private Infrastructure Development Group, where he heads the legal and compliance functions, having played an important role in their establishment.

Jasper Wong is currently the head of Construction and Infrastructure, Sector Solutions Group for UOB, he has strategic coverage focusing on developing sector-specific solutions, leveraging industry insights, data analytics and value-chain analyses. Before taking up this role, Mr Wong was the Head of Infrastructure & Project Finance for Asia in UOB. He has over 25 years extensive project and structured finance experience in the region focusing on power, renewables, oil and gas, petrochemical, infrastructure and telecoms financing. Prior to joining UOB, Mr Wong was working in the transportation industry as the director of Structured Finance Asia for Bombardier Transportation.

Bryan Tan is a partner at Pinsent Masons LLP. Qualified in both England and Wales and Singapore, he practises in such areas as data protection, finance, technology, media and telecommunications and advises corporates as well as governments. He is a legal adviser to the ASEAN Single Window project and the United Nations Network of Experts for Paperless Trade and Transport in Asia and the Pacific. He is the editor/author of Halsbury’s Laws of Singapore: E-Commerce; Halsbury’s Laws of Malaysia: E-Commerce; and E-Discovery in Asia. He also co-wrote Electronic Evidence, the Handbook of Comparative Higher Education Law, and Data Protection Law in Singapore – Privacy and Sovereignty in an Interconnected World.

Click on the link to read the book review, by Jennifer Tay & Rachel Eng as published in the Law Gazette.